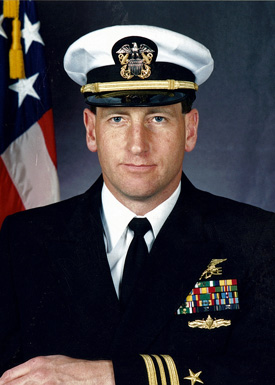 An Eagle Scout and 1979 graduate of Sehome High School, Commander Oswald attended Harvey Mudd College for a year prior to entering the United States Naval Academy. At Annapolis, Pete majored in Ocean Engineering, was a three year letterman in football and, in his senior season was voted to the NCAA Division 1A All-East Team at center.

Commander Oswald’s first assignment following graduation was to the USS Enhance, an ocean going minesweeper home ported in Tacoma, WA. He served in various capacities aboard the Enhance, eventually serving as Executive Officer conducting minesweeping operations in the Persian Gulf during the Iran-Iraq War in 1987.

Subsequently, he transitioned to the Navy’s elite special operations community, graduating from Basic Underwater Demolition/SEAL training in the fall of 1988. Commander Oswald served as a SEAL platoon commander with SEAL TEAM THREE, deploying to the Middle East during the Persian Gulf War. From 1992-1994 Commander Oswald served as the Flag Lieutenant to Commander in Chief, U.S. Atlantic Command and NATO’s Supreme Allied Commander Atlantic based in Norfolk, VA. He was fluent in Japanese and completed an Olmstead Scholarship at Kyoto University in 1999. Pete was serving as Commanding Officer of Naval Special Warfare Unit Four, the Navy’s SEAL element of U.S. Southern Command, in Roosevelt Roads, Puerto Rico, when he died of injuries sustained in a military training exercise that took place in El Salvador on August 27, 2002.

Pete was a highly respected Naval Officer possessing a rich array of interests. He loved nature and the outdoors, especially hunting and fishing. He appreciated the complexity of fly fishing and became proficient at tying flies. He valued the arts and literature and enjoyed writing; he wrote poetry as well as two novels. He dabbled in gardening and was an accomplished and inventive chef.

Those who knew him best remember the love he had for his family. Following his return from the Persian Gulf, Pete married Jenny Noren. His devotion to and affection for her was obvious in all that he did. They had three daughters: Sarah, Ali, and Maggie. Those traits were never more evident than in his family relationships. His loving calm, when surrounded by the chaos that three little girls can sometimes create, was something to behold! Since Pete’s death, Jenny has modeled grace and strength, raising their girls in a way that would make Pete proud.

Pete will always be sorely missed by his family and friends who, in honor of his memory and legacy, have chosen to support the good works of three remarkable Foundations by making them beneficiaries of the tournament. First, the Navy SEAL Foundation, whose mission it is to support the families of fallen SEALs. Second, the Special Operations Warrior Foundation which specializes in providing educational opportunities for the Gold Star kids of fallen special operators. Pete’s girls have personally benefited from both of these great foundations. And third, the Oswald family has established a scholarship in Commander Pete Oswald’s name through the Whatcom Dollars for Scholars program which is managed by the Whatcom Community Foundation. This scholarship is awarded to a local high school student who exhibits leadership skills and intends to pursue a career in service to our country. All three of these foundations provide exemplary stewardship over funds that would address Pete’s values of family, service, education, and patriotism.